Über (German for "Super") Followers are followers that have an extremely high life and strength levels caused by a glitch in the game. While it might seem like having nearly invincible followers with super powers would be a huge advantage often exploited, the process to create them is very time and mana intensive so it is rarely done in a normal game. Because of the resources needed to create them, they are not considered a cheat by most people. 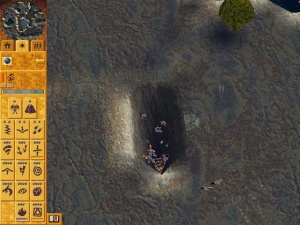 In order to create Übers, the followers must be tortured well past death until their health spikes. The easiest way to do this is to create a tall but narrow valley with the ends blocked off, then bump the follower into the valley with blast. Since rolling causes consistent injury to a follower, he will keep getting more injured the longer he rolls, but since the valley does not contain a place for the follower to stop, he will keep rolling up the other side of the valley forever.

After a while, the follower will have a health bar that spikes off the screen. It's hard to tell this while the follower is rolling, so usually it takes some trial and error to determine the correct amount of time needed. To stop the follower, a shaman will need to use flatten or landbridge to raise the valley, or keep shooting blast until one hits close enough to knock the follower out. 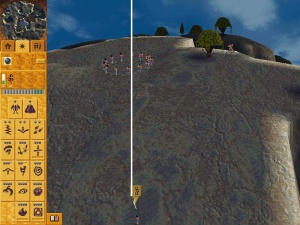 Übers are similar to follower with bloodlust, minus some abilities, and without the time limit. Übers have many times the health of a normal follower, evident by the life far extending off the top of the screen. Like all followers, a lightning strike will kill them instantly, as will water.

In combat, Übers are far stronger than other followers with a brave being able to kill a warrior with a single blow. This counters their health when fighting each other to make a fairly even fight.