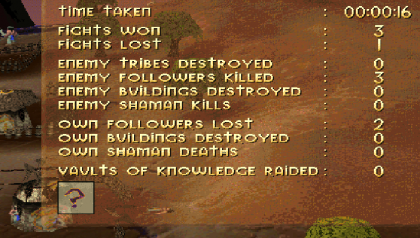 Rushing the Chumara on Single Player ( attacking 16 seconds in)

Rushing is a not so common tactic in populous multiplayer, but rather common on singleplayer. Many people frown upon it, but others embrace it.

There are some types of rushing:

Hard rush - at the start of the level, send sending the shaman (and sometimes the initial braves) against an enemy tribe in order to blast and kill them. On multiplayer, this type of rush is very disliked and people might avoid playing with the rusher again. It's also risky, since if it fails, the rusher is handicapped for the rest of the game.

Light rush - Building early troop buildings, and training fast units. This will affect the rusher's building speed and his mana, but, if done correctly, the enemy will probably have no defense against those early warriors or preacher (or other unit), and will be way more affected - and can even lose. This rushes are effective, but must be done in early stages of the game, or it will simply be considered a troop attack, not a rush.

Late Rush - A relatively late-game rush, which is basically playing the game normally with building a high population in mind, but combining it with offensive spells ranging from lights, tornadoes and earthquakes. The risk and reward on this isn't as high as the previous two, but will give you an advantage or disadvantage for a little while.

All types of rushing are usually not well received by the community (especially the hard rushing kind), but it's still a valid/legal tactic.

"The first rule of warfare as stated above, is to catch the enemy off guard, and while they are weak. If you let the enemy build-up ammunition and troops, then your chance of survival is much less likely.

Any good commander sees the advantage of a swift and decisive attack. However there are some that feel this is a cheat. They usually only object to it when they are being defeated by it, and only after their initial attempt to counter it has failed. I even played in one match where the enemy attempted to rush me, I was able to repel it, and when I counter attacked I became the "cheating rusher" in his mind.

Allow me to put all doubt aside... Rushing is not a crime. Like any other aspect of this strategy game, it is a specific tactic. Just as many Guard Towers and Firewarriors are the tactic of the defensive players, Rushing is a tactic of the extremely aggressive offensive players. And it is not without a big element of risk.

A good rush requires two things, fast-reflexes and guts. If the rush is repelled the rusher is toast, stale and unbuttered. In team games, it is even more risky because while you are rushing one enemy, the other enemy will probably be able to slip a few warriors or preachers into your base making sure you have no way to recover from your initial strike. Like any other strategy, rushing is a way to use the resources available to you during the game to accomplish your objective, destroy the enemy."