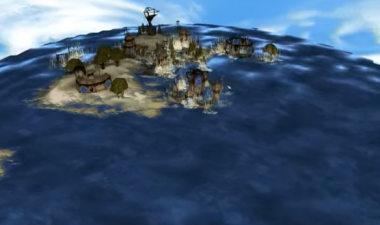 Base rising from the depths, in level 10

This rare effect can set, and then letting appear again a island or piece of land.

The only single-player level where it is used is From The Depths. The nice thing of Atlantis, is that the land slowly rises and it looks nice. The buildings are a bit damaged, but the wildies and trees are still intact.