Boats are one of the two forms of transportation in Populous: The Beginning. Boats are constructed in the Boat Hut by your Brave's and are used to navigate the otherwise impassable oceans of the world. A boat is capable of holding five followers at a time.

How to make boats

How to use a boat

To put a Follower in a Boat, select the Follower and left-click on the Boat. If you have more than one Boat, you can hold down the Ctrl key and left-click on each Boat in turn to put multiple Followers in them. To move a Boat, select the Boat or a Follower inside and left-click anywhere on the water. If you left-click on dry land, the Boat will beach but your Followers will not disembark, unless the followers are already embarked on the beach. Another way to make your Followers disembark, is to right-click on the Boat and left-click on the Disembark icon. Only Firewarriors can attack from boats which makes them useful at intercepting preachers and Shamans before they land. If you are conducting a large-scale naval assault, stay clear of the enemy Shaman as a well-placed Swarm can forcibly eject followers from boats. Also, followers in boats under Magic Shield are completely invulnerable since being in a boat makes followers un-attackable with melee. Boats indicate ownership with colored sails but if a boat has at least one Spy, he can use the "false-flag" trick (for example, one Spy and four Firewarriors under allied colors hitting the Shaman can theoretically make it look like you are being backstabbed since sitting followers do not show their colors). For fast travelling on a boat, when your shaman is inside, blast your own boat and move the direction you want to go. This will make the boat fly and boost its speed for a while. 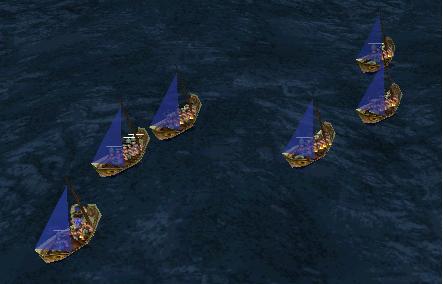 An army of 6 boats being led by the Shaman
Retrieved from "https://wiki.popre.net/index.php?title=Boat&oldid=6176"