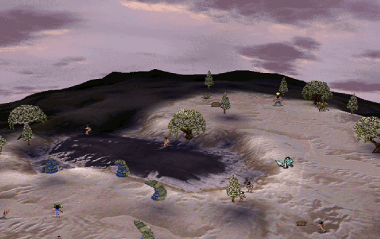 Explored land vs fog of war

Fog of War is a level effect. Some levels have the fog of war setting on which makes objects on the level invisible until discovered by one of the player's followers. Once the player has discovered a piece of the world it will remain visible for the rest of the game.

A player cannot see any other player's (including his allies) discovered areas, but can see shadows and sounds of the objects that lay there. It's also possible to see the building's and some object's shapes on worldview, even when they are hid by the fog.

Areas of the world (Mostly Heads) are visible to everyone at the start of the level. These are reveal fog effects that remain in the area. These should remain in Multiplayer maps in case the fog of war option is on.