Effects are objects in the levels that are either part of the scenery or linked to a Stone Head, for example a volcano effect, or a shockwave effect. Effects can be neutral or belong to tribes. When not linked to a trigger, effects occur as soon as the game starts. On the other hand, they can be linked to a timed trigger, or to a trigger that requires worshipping or people to get close. Effects can also be triggered by scripts, when conditions meet. 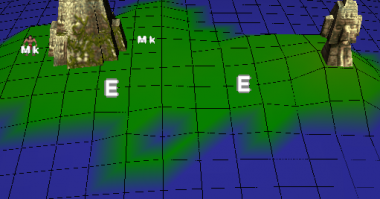