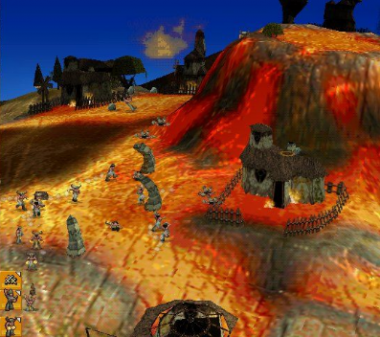 Lava created by a volcano

Lava is temporary harmful liquid that flows over land and water. It is normally created in earthquakes or volcanoes, sometimes it is created using effects as well. If followers and shamans touch the lava they are stunned for a couple of seconds before dying. If the lava is created by a spell cast by a shaman, that shaman is invulnerable to the lava. Shamans can normally become un-stunned by the lava if they cast a spell.

When lava flows over land, it damages the land similarly to how knocked down buildings damage the land, the land goes dark and grey stopping construction of huts on it. It will stay damaged for several minutes until returning back to normal. If lava flows over water it will create new land that is damaged. This is often used by casting earthquake to join islands up when landbridge is disabled.