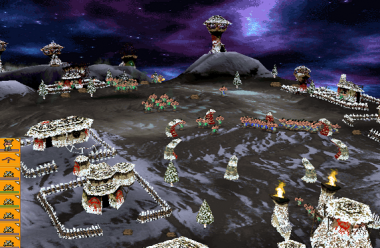 Blue and Green doubling Red, attacking with most of their followers

Doubling is the term which players use when two players, usually allied, attack an enemy player at one time. Doubling can be used to a doubled player's team's advantage since one the ally of the doubled player can attack the attacking players' bases while they are both preoccupied. Professional players will make a good defense in their base before they decide to double their opponents. This strategy is used many levels like Pressure Point and Face Off to either finish a player off at the end of the game or to damage their opponent at the start of the game to give them the upper edge.

Doubling is a strategy and should be taken as so, It is not against any rules unless all players decided to not allow it before or during the game.