The basic idea behind performing this glitch is, to not receive any fall damage at all. By using the Blast Trick correctly you only receive damage of the blast itself.

Mechanics behind the Blast Trick

In the video below one can see, that the Blast Trick does not work in every direction. The camera direction is set on 0. 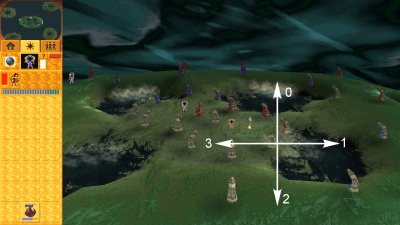 Map directions, when camera is set on 0 (press 0 in game)

Timing when to cast a spell - basically directly after the blast effect lands on your shaman.

This glitch can also be used to avoid receiving fall damage, when be being shot by Firewarriors - usually 2-3 Firewarriors can blast you as high, as a normal blast, so this is the perfect number to perform the trick. It also works with only one Firewarrior, but the fall damage you receive is not high anyways. Four or more Firewarriors make your shaman fly too high though, so the Blast Trick does not work anymore (similar problem as being blasted in direction 0).