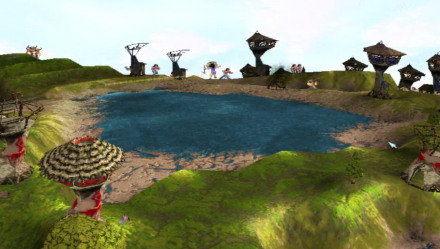 Camping is phrase said in Populous. It means that you are not attacking, only defending. This could mean that your Shaman is in a Guard Tower most of the time and defending non-stop. It can also mean that you attack with a spell then walk off again.

There is nothing wrong with Camping except that your enemy hates it. This can lead to backdoors and forcing them another way into the base. Soon they will break in, so remember not to get in the Camping position it's not pretty.

Often Confused with hanging back to recover after a vicious attack. Attacking without defense is way too risky and time often needs to be set aside to recover defenses and retrain lost men. The trick is knowing how to recover quickly so you do not waste far too much time in defense. If too long is spent camping, the enemy will no-doubt win.

How Do I know If I/Someone Else Is Camping?

At the beginning, it is hard to tell between waiting to side someone, or camping. Here is a guide that should hopefully help you.

Did He Side? If he sided, then it is generally not called camping.

Did He Attempt To Attack Your Main Base? If he left his base in an attempt to destroys yours, he is not camping.

Did He Turn On Swamp And Use It To Block Pathways, With No Intention Of Removing Them? If so, he's a definite camper, one of the worst kinds.

If You Sided Him, Did He Protest? Most campers find Backdooring and Sidedooring an unthinkably noobish act.

Did He Have An Excuse To Why He Was Camping? Most campers have bad excuses, like they're still building or charging up spells.

Did He Use Landbridge To Make More Land, And To Cut You Off? Especially on Skirmish, if he makes a cliff going along the entrance to his base, that's camping.

Did He Put His Shaman In A Tower? This is a key camping technique, and generally used to gain a height advantage and Lightning any coming shamans.

How To Break A Camp

There are many ways to break a camp, but mostly consist of using other debatable tactics.

Sideing Sideing usually works, since they're at the other end of their base and takes away their height advantage. If they don't have any troops, you can attack with warriors one end, shaman the other. They'll go for the shaman naturally, but lose a good deal of braves if you keep them occupied.

Doubling Doubling also works, and you can side double as well (one sides and goes that way, the other through the front)

Dodging Of course, you can also attempt to dodge their lightnings, possibly with ghosts. This is generally unsuccessful, even if they use up all their lights they will be able to blast you at the range you can lightning them.