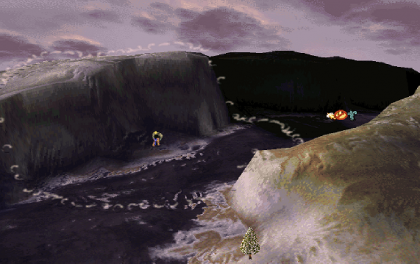 Spellwalking to sneak along the coastline of a steep cliff

Spellwalking is a rather common Populous trick, when it comes to more advanced players.

It consists of casting a spell (even one that is not charged) out of range, in order to make the shaman move - either right away, or in to/through difficult areas.

How to use the SpellWalking trick

The player selects one spell, and click out of range, usually in the intended direction. Most of the times, the player would want to perform some other action (such as moving) with the shaman, in order to cancel the spell. To avoid this, the player can cast the spell as far as possible (to get more time to cancel), or cast on a impossible zone (where the shaman will not be able to move to, anyway - such as water). Finally, an even better option is to use Spellwalking with non charged spells.

- secondly, tell the shaman to cast that spell somewhere out of range, in the intended direction

- finally, after the desired effect, cancel the spell casting action

-To move closer to the edge (usually of water): a benefit would be getting more land out of landbridge, or reaching a spell a bit further.

-To cross a tiny strip of land that is otherwise too narrow.

-To sneak along the coastline of a steep cliff.

-To make the shaman move right away, right after having a melee fight.

-Any other situation where the player might need to manually override shaman's normal pathing.

This trick can be performed with any spell - it's generally better with low range spells.

The player should avoid performing this trick with important spells that are charged, to avoid the mistake of missclicking and wasting the spell.

Spellwalking can be performed using non charged spells, to avoid the risk of misusing a spell.