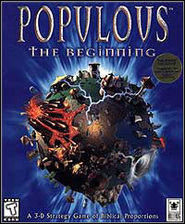 Populous: The Beginning is slightly different from the other two Populous games in that instead of playing as a deity from the beginning - capable of divine intervention, you instead control play through your tribe's Shaman, whose destiny it is to achieve divinity. The female shaman leads the Blue tribe through a solar system of 25 planets, each time mustering her tribe against the opposing forces of the Red, Green, or Yellow tribes - each with its own shaman, and later levels having all three on one world. Whilst the objective is always to eliminate all of the members of the other tribes, there are often only specific ways this can be achieved - through use spells gained from worshiping at the world's "artefacts" ("Stone Heads" for single use spells, "obelisks" for multiple use spells, "Totem Poles" for drastic spell effects, and "vaults of knowledge" for permanently learning the spell); or from building up a land-base, and breeding and training an appropriately sized army to bring upon the opposing tribes. You play the game from an overhead isometric perspective which enables you to quickly move about the globe of the planet you are on, viewing a 3D map which depicts the landscape, structures being built, and people maneuvering about - all done in realtime. A sidebar shows the status of the shaman, shows tallies of the different kinds of followers (see below), and has specific information about what is available to you under the Buildings, Spells and Followers panels. The shaman's spells are granted through mana, which can run out without periods of follower rest, and is represented in the Spell Charge Rate bar.

Screenshot of Populous: The Beginning on the PlayStation.
Throughout the game the shaman's most important assets are her followers. The most basic and versatile kind, available from the beginning via the shaman's Convert spell used on the primitive, bearded "Wildmen", are the bare-chested Braves - who build, gather materials, and can worship or fight for you. Later the tribe gains the knowledge to build training facilities, that will allow the Braves to become armored Warriors. These are the best at hand-to-hand combat and serve as the primary fighting forces to be led against the enemy. Along with all other followers can guard your home land-base with Guard Posts, or around the shaman with the G-key guard command. Later you can train mitre- and vestment-garbed Preachers, who convert attacking enemy forces to your tribe (but cannot convert enemy Preachers, who will attack them); horn-helmed Fire Warriors, who are almost as weak as Braves at hand-to-hand melee, but can shoot poweful fireballs at enemies from a distance; and eventually the combat-weak, black-cloaked Spies, who can inflitrate and steal knowledge from the enemy tribes, and sabotage their buildings and projects, disguised as a member of the tribe. Buildings are upgraded as they are inhabited for periods by followers. Braves, by gathering wood from surrounding trees as when they are first built, can reconstruct the Small Hut into a Medium Hut, and eventually into a Large Hut, each different in its architecture as well as size. You construct buildings - Huts and training facilities - around your Reincarnation Site, where your shaman will be reborn if killed to create a land-base to defend your tribe against the enemy tribes with, especially with the help of positioned Warriors, Priests and Fire Warriors, and Guard Posts and Guard Towers. Land-bases can be further adjusted by the terrain-altering spells Landbridge, Erode and Flatten. In later levels you gain the knowledge to construct boats and primitive balloons to attack your enemies with.

Populous: The Beginning - Undiscovered Worlds is an expansion pack released for Populous: The Beginning. It was only made available in the United Kingdom, and offered 12 new singleplayer and 12 multiplayer levels. Fans of the original game have subsequently released more expansions of the game, at Populous: Reincarnated. Wildman Productions has also created some game expansions, including the new, much more challenging, Age of Chaos modification. Some of these have deep modifications which change the colours, landscape and look of the game. More to be found on these mods at Wildman Productions Website.

The Populous solar system is home to 25 unnamed planets of varying landscapes, from blood-red and volcanic, to twilight sky and purple seas, to expansive verdant green plains. Unlike the worlds, the recurring enemies represented by the opposing tribes are named - the Green tribe are the "Matak", the Yellow tribe the "Chumara", and the often-dominant Red tribe are named the "Dakini". As well as the names of the tribes, we are given a glimpse at the tribe's language. The game makers also took care to give the followers of the tribe some sort of tribal language, to bring home the theme of the game as a war between primal tribes in the beginning of the worlds.