The Landbridge spell, when cast on the far shore of a stretch of water separating two pieces of land, will join those pieces of land by raising the ocean floor. You can also use the spell to create a ramp up to the top of a cliff by standing at the bottom and casting the spell on the top; or you can join two hills together to make a handy defence platform. To Use: Find two pieces of land separated by a small stretch of water and move your Shaman to the edge of one shore. Left-click to select the Landbridge spell from the Spells Panel and move the mouse pointer so that it is on the edge of the opposite shore. Left-click to fire. It is possible to Sidedoor with this spell by join to an enemy's settlement land. You can also use landbridge to save your shaman's life when she hits the water. If you cast the spell to a near by land just as your shaman hits the water, a strech of land will appear,saving your shaman from drowning

Note: It does not work if you cast it in the middle of the ocean.

There are 5 steps to make very tall hills with Landbridge itself, starting with a flat bit of land. When you happen to find a point with both slopes on eirther side, you can cast one landbridge for it to go to the maximum height.

Step 1: Cast Landbridge just over the ocean, or anywhere that makes that part of land slightly higher than the rest.

Step 2: Cast Landbridge from halfway up the slope to the highest point of the land.

Step 3: Repeat the process until at desired height. 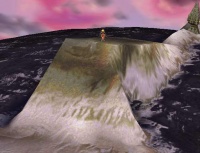 Step 4: Landbridge to the highest point.

Step 5: Use a Landbridge or Flatten to make the top flat.