There are four tribes in Populous: The Beginning; all of them are identical in ability.

Each tribe is distinguishable by diffrent color, by a diffrent shaman graphic, and by different building appearences. 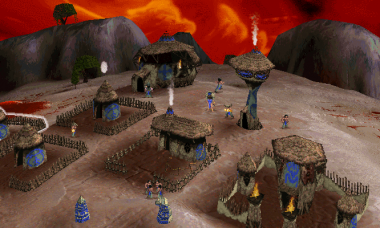 In terms of coding, the Blue tribe is called the Player tribe as seen in Single Player saved games. In Single Player, this is the tribe that the player takes control of to aid the Blue Shaman on her quest, to destroy her enemies and become a god. Some players incorrectly call this tribe the "Ikani" (a variation on "Dakini"), though even the developers of Populous say it was never given a name. 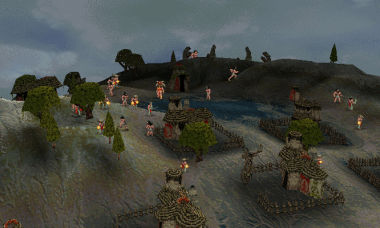 The Dakini are probably the most powerful enemy in Populous, as they are arguably the most militaristic. When the player fights the Dakini, they have (50% of the time) their camp entirely complete.

Invasion of the Dakini

When the Dakini attacks, they use a good strike force. They are the most forward and aggressive tribe in the game. On a mission like Archipelago the tribe uses boats for an early, heavy attack. A Dakini attack force typically consists of 4 Preachers, 6 Warriors and 6 to 8 Firewarriors. The Dakini Shaman is the one to be feared most of them all, making use of very powerful spells toward the endgame, notably Firestorm, Angel of Death, and Volcano. Fortunately, they don't launch surprise sneak attacks as often as the Chumara.

Defensively, the Dakini tends to occupy their Guard Towers along the perimeter with Firewarriors. Just as in their attacks, the Dakini makes more use of Warriors and Firewarriors than Preachers in their defense. 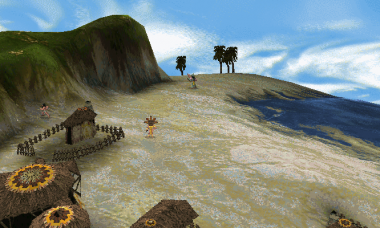 The Chumara tribe wear yellow clothes and their Shaman's mask is shaped like a sun. They are generally considered to be the enemy tribe of middle strength. In the level Unlikely Allies, the Chumara Tribe is your ally and the Dakini Tribe is your enemy. On the level, Human Shield the Chumara tribe is allied with the Dakini. You and the Matak Tribe are enemies with each other and enemies with the Dakini-Chumara Alliance. The first level where you will meet the Chumara is Crisis of Faith, where the discovery of the preacher takes place.

The Chumara tribe is popular for being on islands by themselves in Single Player. They are known for their use of preachers as well as some uncommon (by online standards) tactics to achieve victory. In some instances, they can be a more dangerous opponent than the stronger Dakini tribe as a result of reliance on sneak attacks.

They are on a island to themselves in levels:

Attacks from the Chumara can often be unpredictable and unexpected. In Level 6: Building Bridges, the Chumara often attacks randomly, and can vary their attacks from the north-west passage or from due north. This unpredictability is also apparent in their use of followers and the Shaman's choices of spells. They make heavy use of Preachers, and later also Spies. In the mid-late levels, their attack forces are often protected by Magical Shield, which makes counter-attacking their attacks harder due to many shielded Preachers. Spies are often sent in random intervals, and can disrupt trooper production if they ignite a Training Hut. The Chumara also makes heavy use of boats and balloons in their attacks, especially the latter. The Chumara Shaman also likes to turn her attacking forces invisible for a surprise attack (which fits into the unpredictability factor), which is first witnessed in Level 7: Unseen Enemy. She also makes handy use of the Hypnotize spell during an attack, turning her enemy's followers against themselves, first seen in Level 11: Treacherous Souls.

Defensively, the Chumara places Preachers more so than the other followers around their perimeter. Guard Towers on their base's perimeter are usually occupied with either Firewarriors or Preachers. Other Towers within their base are occupied by Spies (who can conceal activity in the base) or the Shaman. The Shaman makes good use of the Hypnotise spell defensively as well. 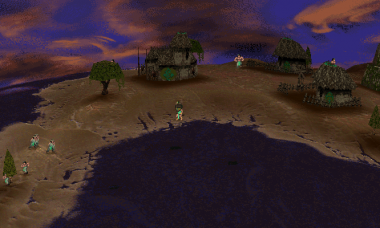 The Matak are the green tribe in the game. They are usually the weakest on worlds where all 3 enemy tribes are found.

Invasion of the Matak

The Matak are arguably the most peaceful tribe in the game. If and when they do attack, their attack force is usually on the smaller side, but they can occasionally attack with a big one as well, as can be seen in Level 16: Bloodlust. Their attack force is usually a good balance of Warriors, Preachers, and Firewarriors, and they use Spies very rarely. Their Shaman, however, wields many powerful spells of nature, and should not be taken lightly. She makes good use of Erode (as seen in Level 10: From the Depths and Level 12: An Easy Target) and Earthquake (Level 13: Aerial Bombardment and Level 18: Headhunter). During an attack, she also often uses Swamp to kill defending enemy troops & disable guard towers (ironically, she often manages to kill herself by walking into her own Swamp), and Swarm to have free passage into an enemy settlement. Curiously, on some levels, the Matak tribe seldom attacks, if at all. This can be seen on Level 23: Inferno. On the last level (The Beginning), the Matak uses a "defensive attack" strategy; they build very close to the Blue Tribe's settlement, which can provoke the Matak into "defending" themselves.

Defensively, the Matak tend to build a lot of Towers, and uses a balanced mix of followers in their defense. Of all the tribes, the Matak tends to be the best at defense, using a "Booming" strategy; as they seldom invest in attacking, all their followers are used for defense. See above for the "defensive attack" strategy used in Level 25: The Beginning. A fitting motto for the Matak would in that case be: "Defense is the best attack". The Matak Shaman often uses both Swamp and Swarm to kill or distract enemy invaders.

In the Demo version of Populous, the tribe names for Yellow and Green were switched such that yellow was called the Matak tribe, and green was called the Chumara Tribe. By placing units of the green tribe into a level played in the demo, users can confirm that the names were indeed switched.