Difference between revisions of "Pressure Point"

Pressure Point is identicle to the Single Player level, Middle Ground. However most players do not worship the Stone Head which grants you Armageddon unlike the computer players do in Single Player. This is a level which goes in depth on defending with towers. You each start with a good shaped, bunky base with many wildies spread over the terrain. Earthquakes will shape the land heavily but it will take many earthquakes to sink it down to water as the land is so high.

Each player starts off on a large, high base which is has three paths coming out. Two paths lead to the two opposite bases and the middle path leads to a patch of land in the centre which has a Stone Head on several steps of land. The level is croweded with masses of wildmen and has quite a generic landscape. 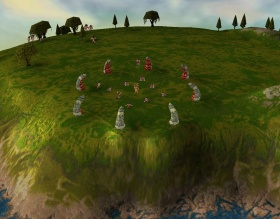 Start of the Level

A basic strategy to starting off is: As soon as the match starts convert largest group of wildmen then send ten braves to firewarrior hut plan. Your shaman should be done making her Reincarnation Site pillars, so imediatly move her to the strip between you and your closest enemy. While she is moving lay tower plans across that strip and send braves to it (1 per tower plan). Make two converts on the strip. Then convert all the wildmen on the strip to the middle, make a line of towers down this strip on the side where your enemy faces until you reach the middle. Lay one tower plan on the first step of the middle. (1 brave to each plan). Your Fire Warrior Hut should be ready, train six firewarriors and use them to fill the towers from front to back on each strip. Convert some of the strip to your ally but leave some for your ally. Lay hut plans when you have idle braves, (five braves per hut). Convert all the wildies around your base until you have a population of 40 or over. Charge Earthquake and Ghost Army then send ghosts to take firewarriors out of the towers. Keep warriors ready and keep repairing your defense with firewarriors and landbridges, try not to waste earthquakes on towers and instead use them on huts and hills at the enemy base, use tornadoes/warriors to destory lone towers. Keep the pressure with warriors and move you defense closer to the enemy base.

Remember on Pressure Point, If you don't have the upper hand, then camp. Wait until your huts upgrade and etc, until your population is at least 150+ and you have a few troops to spare. Always repair attacks on your defense and keep a steady number of firewarriors on hand to refill those towers. Braves also serve as a good defense because they stall for time and can push shamans into the water along with extra pushes from a firewarrior. If you don't even want to waste as much as a brave, patrol some ghosts, although braves work better as ghosts can still stall for time if they are in quantity.

Attacking is very important on Pressure Point, because if your not attacking, your not winning! That goes for almost all levels, though.

Ok, most use Earthquake to attack towers, but some do not advise this, Tornado works much better in some player's opinions.

Say at the start of the game you are building towers and your opponent casts an earthquake on you. It probably hit about 3 towers. If you built them good enough the earthquake should not destroy any of them and only catch fire which would take away about 3 wood from them. You can easily repair this by assigning one brave to each, and that would only take away 9 wood. Then it shouldn't take long to repair it, by then your opponet may have half an earthquake.

Use Tornado on towers, unless you see millions of towers clumped together. Tornado is nearly guarenteed to destroy a whole tower and sometimes chips off wood from other towers.

This is another vital part to winning, after you destroy your opponent's defense or part of it, you should build over it, otherwise a game could take a long time.

When your thinking, "Their defense is worn out, now what?", attack their village. The universal Pressure Point strategy is to back them up to their village then let hell break loose and cast those earthquakes and volcanoes you saved up during your battles. Don't forget troops too! 2 warriors to an upgraded hut is quite good.

This article needs expanding
Please focus on Defending, Attacking and Adapting
You can find more information on the discussion of this article. Use the Help page when reworking this article.
Please remove this message once this article has been expanded.